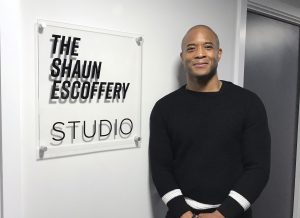 Shaun first studied architecture at Barking & Dagenham College in the 1990s and then was persuaded by friends to join the performing arts course, due to his love of singing.

He became good friends with fellow students Idris Elba and Razaaq Adoti and the trio have all enjoyed great success in the performing arts. Shaun made history this year when after 12 years of playing Mustafa in The Lion King, he became the longest-standing actor in the world to play this character.

The Shaun Escoffery Studio is part of the East London Institute of Technology at the College. The studio contains a powerful, dedicated audio edit suite and the Foley Room which houses lots of high-quality recording equipment for voices and sound effects.

At the official naming event on 10 December 2020, Shaun was interviewed by Assistant Principal, Jason Turton, whilst media students had the enviable task of filming, producing and editing the footage. He then treated the students to a live rendition of his hit Days Like This, with students again gaining real world experience by managing the lights and sound and recording the session.

Performing arts students formed the socially-distanced audience and got to ask Shaun their own questions. They were thrilled to hear from the modest and inspiring Shaun about this route to stardom, including his early success of gaining a role in the opera Les Miserables; he explained how he landed the role despite never having sung opera before; he played Enjolras and was the first black actor to do so.

17 year old Jacob Sharples from Dagenham said: “It was really fun, such a great experience to listen to Shaun talk and sing. I love his music and his personality. He was so friendly.”

After the event Shaun said: “I am completely overwhelmed, it’s vastly different to when I attended the college. I cut my teeth here, I really did and I learnt a lot in this place. Now, with these amazing facilities, the students are in really good stead.

“I’ve never seen anything like it. Having the studio named after me, which could put some professional studios to shame, is absolutely brilliant.